If you’ve been following along here for a while, you’ll have noticed that we haven’t updated the iOS app in quite some time. Some suggested we turn it into glue, and others thought we should find a nice retirement home for it. Conspiracy theories abounded, but the real reasons for the long hiatus are (as expected) far more pedestrian:

– We’re pretty lazy. We already have an iOS app, and it mostly works. It usually doesn’t crash. What more do you really need?

– We’ve standardized on the BlackBerry Passport here at Plex, so nobody actually has any iSheep devices anymore. The square screen ensures your album art looks perfect no matter how it’s rotated!

– Apple keeps changing things! The app was written in Objective-C. Then we started to rewrite it all in Swift. We were almost ready to release, but then Swift 2 came out. Total rewrite. And now we’re working on crafting it in hand-written Bitcode (our developers are hard core). [JUST KIDDING! For the record, the app is still written in Objective-C!]

In all seriousness, though, we are so excited to announce to you our brand spanking new, rewritten-from-scratch (though maybe not in Bitcode), pixel-licking delicious, amazing iOS app! The app is essentially our poster child for new feature support: It’s got Plex Home, premium music (including multi-disc, Plex Mix, music videos, and more), full support for extras, secure connections (remember those top-notch certificates we gave you all?), and so much more. The app has been reengineered from the ground up, and requires iOS 8.1 or higher. It also requires a very recent Plex Media Server, so please make sure to upgrade.

Feast your eyes on this lovely new app! 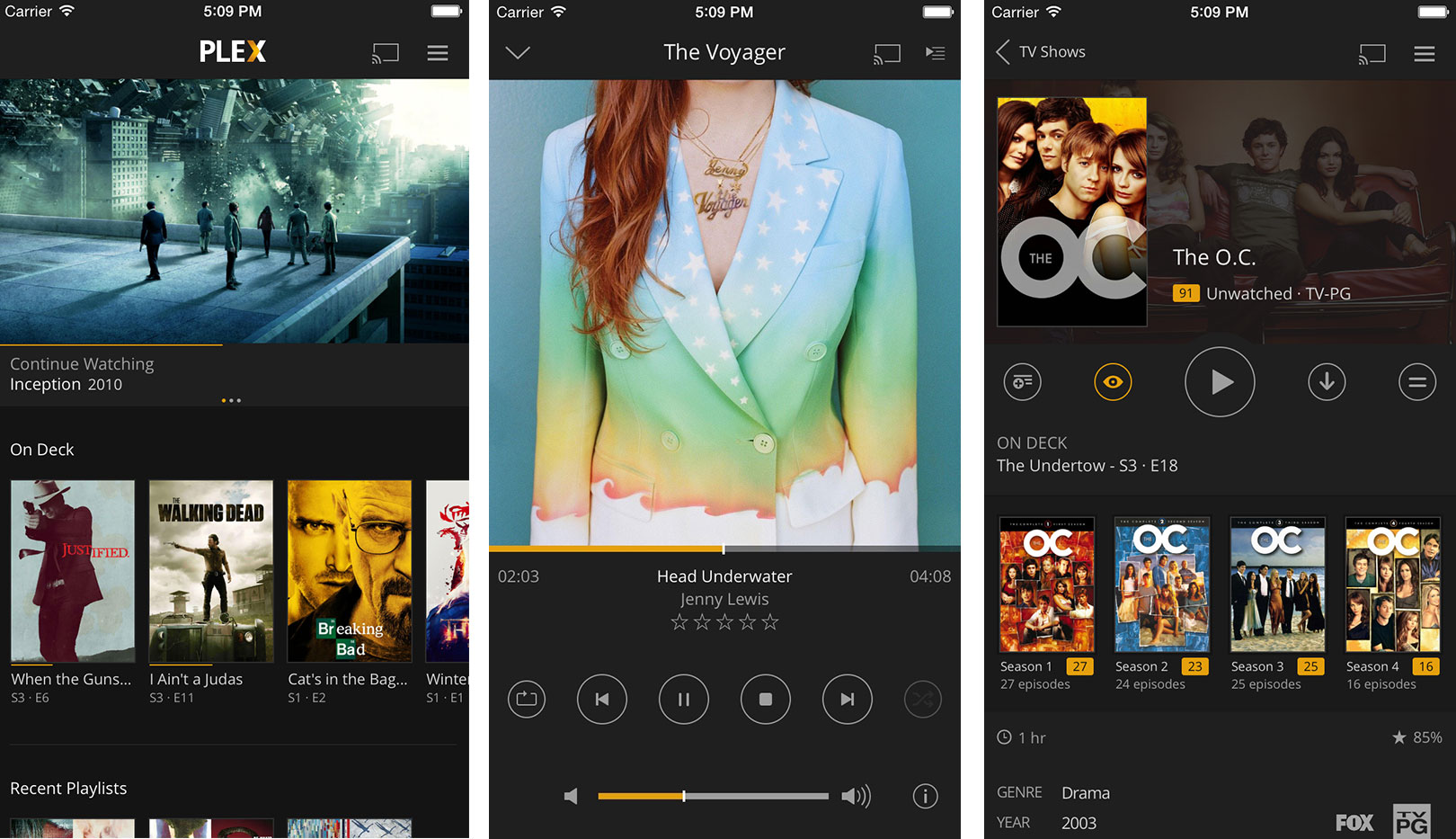 Let’s walk through some of the highlights.

And there’s one more thing… 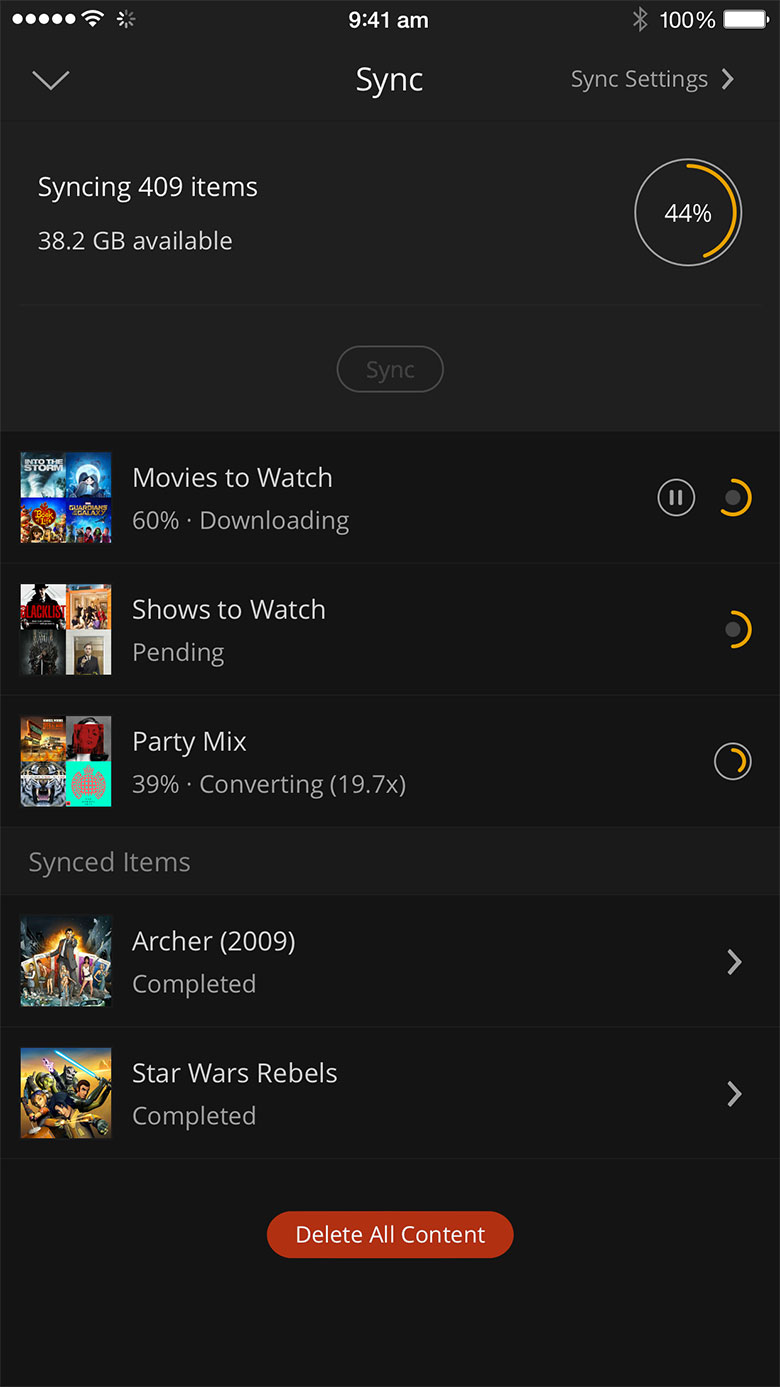 People love Mobile Sync. After all, how awesome is it to be able to snag a movie or a few episodes of a TV show and watch them on the bus, plane or horse drawn buggy after you’ve used your time machine to go back to the era of hand-churning butter (or just visited rural Pennsylvania)?

But we know it has its limitations. It can be slow. Occasionally it’s even been known to nuke all your synced content. We’ve even heard it once ignited a small-scale war between two remote and undiscovered tribes of the Amazon. Whoops.

This is why we’re thrilled to announce that our brand new iOS app is the first to include our next-generation mobile sync technology, known, naturally, as Sync v2. What’s so great about it? Lots.

First of all, it’s much faster, especially for incremental syncs, which can literally be hundreds of times faster when you’ve got a lot of content synced. It also supports partial sync, which means that if you leave your house before finishing a large sync, you’ll still have perfect access to all the media you managed to sync. It’s also much more reliable, and there’s improved support for background syncing. Last, but definitely not least, you can sync playlists.

Also, just as cool, the content is synced onto your device into a pint-sized version of the Plex Media Server (internally, we’ve been calling it the “nano server” but then someone else stole that term). It’s literally the exact same code which runs on your desktop or NAS, stripped down for core functionality. What does this mean? It means that all the rich functionality for filtering, sorting, and shuffling all your music, plus discovery features, are available on your phone with your synced content.

Head over to the app store today, or just wait for your app to be silently upgraded. Our crack team of writers has been working hard on great documentation for the new app. You’ll want to check out some notes about some known issues (we just couldn’t wait any longer to get this into your hands!) and then kick back, sip a cold IPA, and read all about the new app!

Our shiny new iOS app! is a premium feature and requires a Plex Pass subscription.