Step Right Up for a Double Feature of the Devil’s Carnival & Alleluia!

“Let us remember the past, so we may better destroy the future.” – The Devil

Do you like your horror with a sing-songy narrative and musical accompaniment? Queue in line, and punch your ticket to my first double-feature recommendation that pulls from Plex’s horror catalog.

As someone who values “carnevil” big-top terrors told through Broadway-inspired presentations, this article’s selections are near and dear. They bring us to the gates of Hell, and Heaven’s doorstep, on behalf of filmmaker Darren Lynn Bousman’s collaboration with creative mastermind Terrance Zdunich. Although, before we praise their names, allow me to offer a quick disclaimer. 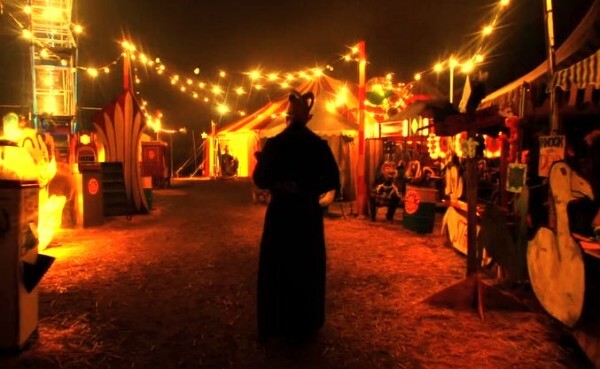 The Devil’s Carnival and its sequel, Alleluia! The Devil’s Carnival, were always intended to be the first two chapters in a trilogy. Alleluia! kicked off and completed its traveling roadshow back in 2015 – the same release model for both titles – and we’ve since heard no chatter on a third as of this year of our pious lord, 2020. One can only assume Bousman and Zdunich’s once-planned trifecta, with a completed third script (reported even before Alleluia! began production), will remain a one-two punch that teases something more significant and cataclysmic. I understand any frustrations that may stem from essentially two lead-in films that tease a biblically harmonious war that doesn’t exist (yet, maybe never).

All things considered, I’m still recommending both titles, as a fan, with due reason.

What you have to remember, and what’s sometimes hard to believe, is that these indies are low-budget, even self-funded passion projects. Satan’s circus domain and God’s marble conglomerate facilities must find ways to enhance production value with (comparatively) empty pockets. That’s the magic behind every carnie heckler, backstage costume designer, and decoratively-inclined set dresser who invest their hearts and souls into righteous or damned world-building. You can practically smell the wafts of sinisterly-salted popcorn while fawning over the flowy gowns worn by angles in training. Themes of the three-ringed variety draw crowds, ready to be wooed by a colossal butting-of-heads between above and below. Zdunich – in addition to notching credits as writer, composer, and producer – stars as “The Devil.” A rather slick and sophisticated representation of Lucifer that’s heavily prosthetic, impressively applied, with Zdunich’s baritone vocal talents serving his charismatic ringleader of the underworld so well. In The Devil’s Carnival, el maestro welcomes three sinners into Hell (Sean Patrick Flanery, Briana Evigan, Jessica Lowndes) as he narrates through readings of Aesop’s Fables while temptations test the unfortunate souls. In Alleluia!, focus shifts to God’s corporate offices (Heavenly Productions Inc., with Paul Sorvino playing God) – but that doesn’t mean the sequel is cleansed of malevolence. The Devil continues sharing Aesop’s Fables, suggesting how they relate to God’s flock and how Heaven’s holiest might be even bigger bastards than the denizens down the elevator shaft that connects both realms.

What drives my adoration from a musician’s perspective is how headline singers are allowed to shine. In The Devil’s Carnival, where rapscallion behavior reigns supreme, songs vary between bar shanty laugh-abouts and somber pleas for mercy. Then we flip up-above in Alleluia! where we’re treated to the following: doo-woppy singalongs from a choir in sailor outfits, Tech N9ne as a rule-abiding librarian spitting fire, and David Hasselhoff as a more theatrical showman with more extravagant pop sensibilities. There’s no one single “vibe” in terms of song choice. Zdunich’s forked-tongue crooning is my favorite sound, but what’s equally appreciated is how artists like Ivan Moody – who you might know as the aggressive lead growler of Five Finger Death Punch – prove themselves as vocalists with enough range to crush, say, a sad hobo’s tale sung with bellowing grace.

That’s half the fun of these movies. Those fans of the indie horror and indie music scenes will have a blast identifying all the random actor appearances. Names like Bill Moseley, Shawn Crahan (Slipknot), Marc Senter, Alexa Vega, Dayton Callie, “fairy pop” violinist Emilie Autumn in a phenomenal turn as “The Painted Doll” – and that’s all before Alleluia! and ascension. Bousman’s sequel enlists far more “famous” theater talents, including Adam Pascal (Rent), Ted Neeley (Jesus Christ Superstar), Tech and The Hoff as already listed, Jimmy Urine (Mindless Self Indulgence), Chantal Claret (Morningwood), Danny Worsnop (Asking Alexandria), then other names like Brea Grant as a wind-up “Rosy Bayonnette” soldier and Barry Bostwick as a nosy journalist?! One of those “the list keeps going on” situations, primed for a third film that would allow all these zany characters to come together in combat. It is, to admit, a shame we’ll probably never see the culmination of all these introductions and buildups.

Still, there’s value in these sometimes silly, often outrageous, always inviting adaptations of Aesop’s Fables that are magnificently macabre. The way searing lines of dialogue are peppered in, such as the zinger I started this article with, that sting like a scorpion’s tail. It’s not that we’ve never heard these proclamations of the wicked and recontextualized ideas about how those in power think themselves pure when they’re no better than those they’ve villainized. The Devil’s Carnival and Alleluia! find this reinvigorated way to blast religion and call attention to the hypocrisies abound while treating audiences to entertaining performances of a unique tune. Maybe it’s the lullaby of Zdunich and Jessica Lowndes dueting the lines, “But I don’t want to go to sleep, in all my dreams I drown.” Perhaps it’s Pascal’s swing-lounge rocker’s rendition of an after-hours club hit as it might exist under God’s rooftop. There’s just this twinkle, an unmissable quality that keeps me returning despite the franchise’s screeching halt. Alas, I leave you with my final plea. Allow The Devil’s Carnival (at only fifty-four minutes) to tell you its tales of lost, wayward travelers. Follow El Diablo as he plans his attack against Heaven, and Alleluia! pulls back the curtain on all the unsavory details behind those pearly gates we cherish as beacons of hope. Maybe, just maybe, we’ll someday get the finale this one-two punch deserves (with that cliffhanger’s ending). Until then, take a trip to this cartoonishly chaotic world born from Terrance Zdunich’s mind. Then maybe sell your soul for a third chapter or offer a penny for one last limerick that’s more than earned. Step Right Up for a Double Feature of the Devil’s Carnival & Alleluia! is a premium feature and requires a Plex Pass subscription.