I have been coerced into going camping for the next two days, up behind the volcano. It’s apparently freezing at night, full of sharp rocks, is reminiscent of Mars, and there’s always the chance of waking up in a pool of lava. Why anyone would voluntarily subject themselves to such abuse is really beyond me, but I agreed go before hearing many of the specifics.

So while I’m freezing my ass off and probably getting devoured by dinosaurs that have survived the last 65 millions years on a strict diet of hikers, I thought it would be only fair to leave you with a beta release of what we’ve been working on for the last month. This is, to quote Scott, the “throw out your XBox” release.

NOTE NOTE NOTE: You MUST delete your Keymap.xml file, and probably should delete your entire Application Support/XBMC folder before upgrading. If you don’t and then file a bug I will feed you to the dinos myself. This is also a beta and so does still have some glitches.

This release is based on very nearly the latest “linuxport” code, which means you have a month full of bugfixes and new goodies and hard work by the rest of the XBMC team. Our motley OS X crew have mainly been drinking tequila, but in between bouts of body shots, we had a bit of time to bring you some new stuff:

Remember, this is a beta release, so there are likely still little issues lurking. Python is still known to be unstable, unfortunately. Seeking using the analog triggers is still a bit strange. Weather appears to be broken. We’ll likely be making a few more tweaks to the 360 keymap. Please post issues you have with the beta either here or on the XBMC forums, and help each other out. Hopefully we’ll make the final 0.5 release within a week or two, possible with a few more beta iterations.

In terms of controller options, we realize there are many more out there, but the three described above (Apple Remote, Universal Remote, and XBox 360 controller) are the only ones we will support or write code for, as we believe they provide a complete gamut of options, and frankly we’d rather work on getting PacMan to work than on getting every last controller to work.

The new release is available here as a torrent, or here by regular HTTP download.

And now, your moment of Barkley. Yes, he’s hoarding three raquetballs, which he believes will eventually hatch into little blue squeaky smurfs. 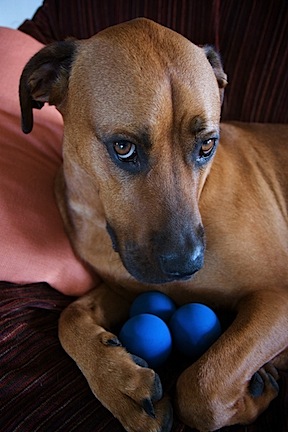 Release 0.5.0b1: Mo betta beta is a premium feature and requires a Plex Pass subscription.