Since we released the Plex Media Server we’ve received a large number of requests for documentation for the Python Framework used to build plug-ins. That day has finally arrived!

We’d like to introduce you to our new Developer’s site, created by James with design help from the ever-talented Alexis. 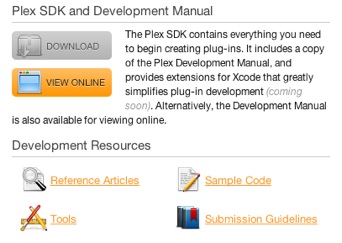 We’re still fleshing out many of the areas of the developer’s site, but the development manual is online, the result of hours of work by James (Framework documentation) and David Bartle (site configuration documentation).

So if you’ve been waiting for documentation to tackle that plug-in project, or you simply could use a nice reference, check it out!

(And to all the brave developers who waded in without documentation and created some kick-ass plug-ins anyway: Namaste!)

Documentation for Plug-in Developers is a premium feature and requires a Plex Pass subscription.