Release 0.5.20: Progress is the opposite of Congress

*** Hold off on this release for now, there’s something borked with the settings ***

First of all, I want to make a big shout out to our forum members (citizens of Plexville). We just passed 10,000 posts, and we’re just a hair’s breadth away from 2,000 members. It’s a friendly, productive, helpful community, and we like it that way. A warm welcome to the new members, and a sincere thanks to everyone who helps out, we couldn’t do it without you!

We’ve been busy working on some awesome new features for the upcoming 0.7 development version, but we wanted to step away for a moment and fix some of the lingering bugs in the 0.5 series before we declare it stable. You can find the download on the home page or via Sparkle, as soon as I update the appcast.

Since Isaac has made tweaks to the keymap and advanced settings, unless you’re an expert user who has made your own edits, you’ll want to delete advancedsettings.xml and Keymap.xml from ~/Library/Application Support/Plex/userdata/ so that the new defaults can be installed.

As usual, we’ve also pulled fixes from the XBMC code, including shoutcast fixes by the ever-productive vulkanr, the latest scrapers, the usual assortment of brilliant stuff by jmarshall, and more (RTMP fixes, etc.). I also pulled r15344 as requested by chitz.

This is a photo of Barkley with his brother (i.e. littermate)Johann. We met him by chance at the dog park we used to frequent in Pasadena after noticing the striking resemblance. 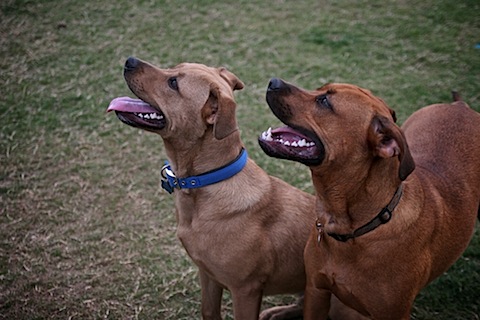 Release 0.5.20: Progress is the opposite of Congress is a premium feature and requires a Plex Pass subscription.