I like these hot-fixes few for a different reasons; first and foremost, it’s an easy way for us to get new code into your hands in the quickest possible way. Second of all, it’s a great way to get feedback from you before we roll another official release, which will offer itself via auto-update.

So if you’re feeling brave, take them for a spin, and if you’re not, please wait for the official release. One comment we received was something along the lines of “Please don’t make hot-fix releases, just make official releases” and I think that’s missing the point a bit. It’s not an either/or sort of thing, and by all means, if you want to wait for the auto-update via Sparkle, please do so.

But if you live on the edge, regularly swim with sharks, or fly to Pamplona for the running of the bulls, try the latest hotter-fix release here. It fixes the following issues:

As with the last one, drop the new application into ~/Library/Application Support/Plex and replace the existing one. Look at the string after the version number to make sure you’re running the latest code, and let us know how it works for you! As long as this version doesn’t have any more regressions, we’ll roll it into an official release shortly. 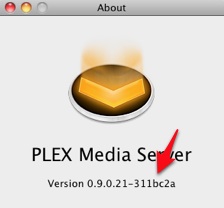