Things have been quiet on the blog recently, but behind the scenes we’re busy working on some exciting new features, and Plex/Nine is beginning to take shape.

In the meantime, our plug-in developer community has been doing some absolutely amazing work. We’ve had such a deluge of new plug-ins that we’ve revamped our workflow and created a Lighthouse project to manage things better. Huge props to Ryan McNally, Gordon, Ian, Robert, Nikolas, Rick, Scott, and all the others that make the plug-in space so rich and exciting.

Isaac has been kind enough to take on the role of release manager and has been working tirelessly, coordinating the efforts of the plug-in developers, framework developers, and designers. Not to mention he’s written some new plug-ins!

Additionally, the very skilled Andreas W. (tassitassi on the forums) has joined us and is contributing a huge amount of artwork and icon design for new plug-ins (and improving existing art). This guy is incredibly talented!

Onto the new plugins; first up is MSNBC, written by Isaac. This is one that can certainly help users in “cutting the cable”. Use it to stay current with daily news updates in health, entertainment, business, science, technology and sports video. 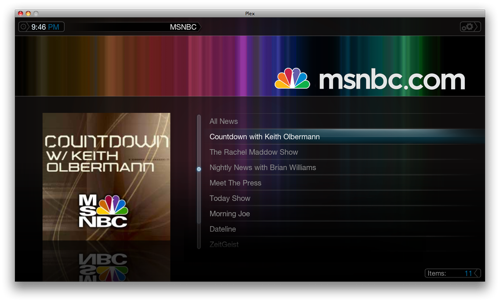 Hot on the heels of MSNBC is an update to our CNN plugin (also by Isaac, who’s rapidly becoming a Python god) that allows you to watch live CNN news streams. While the streams are generally only available Monday-Friday 7AM-8PM PST I think this is going to fill a huge gap currently missing in the content tree. The only thing that would make it better is if we could get James Earl Jones to say “This…is Plex”. 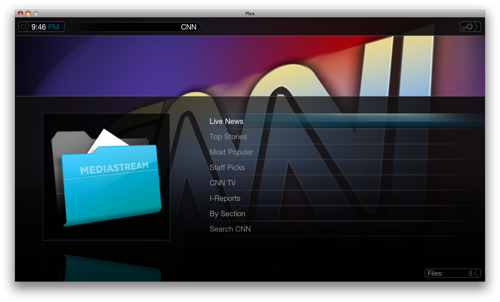 Next up, and written by Gordon Johnston, Pro at Cooking is a comedic cooking show hosted by Dave Lee, also known by his Chinese name Dawei. Each episode features a female assistant, who tends to be a victim of chauvinism (in the name of humor). The series is filmed in Toronto.

One note: Isaac made the Eggplant Parmesan for his wife and he can’t stop talking about it. Also written by Gordon Johnston, Interview Project by David Lynch is a neat site which features a road trip where people are interviewed across the country. Really cool idea, and really cool content. 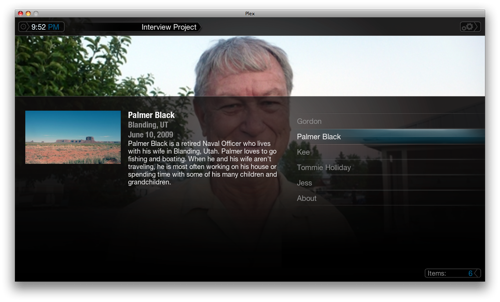 Written by Jdevoo, The Web Gallery of Art is a virtual museum and database of European painting and sculpture of the Gothic, Renaissance, Baroque, Neoclassicism, Romanticism and Realism periods (1100-1850), containing over 21,300 reproductions. Never took art history in college? Crack open a beer and stare at some art. Use it to impress a date. Next up, written by the prolific Gordon Johnston, the BBC Podcasts plugin allows access to BBC podcasts on a variety of topics, and is accessible outside of the UK. 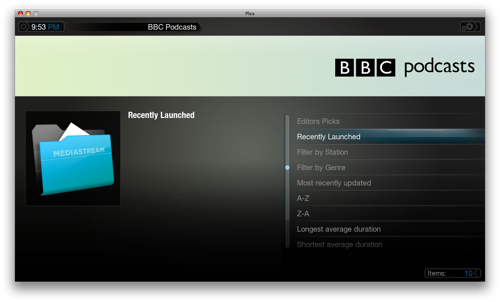 Last up is an update to The White House plugin which adds support for much more video content and also adds a Photos section with the latest photos from the White House’s flickr feed. Rumor has it that Obama relaxes at the end of the day in front of Plex. 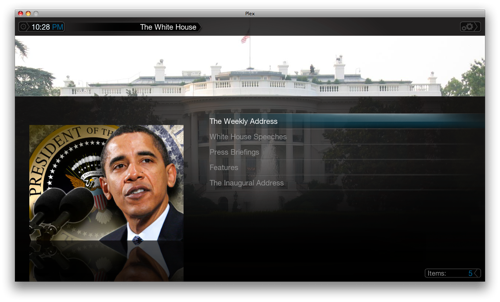 One last note: The plug-in authors should check the released versions, as they may include minor changes or fixes.