A new Plex incremental and some MP4 love

As you might have noticed, we finished up on a round of incremental releases and made v0.9.1.9 an official release, updating the main download page and pushing it via Sparkle update. We want to take a moment and thank you all for trying out the incremental releases along the way, and giving us great feedback on them. We also hope the more adventurous among you enjoyed playing around with new features and fixes before they were officially released!

Without further ado, I’m happy to introduce you to a new incremental chock full of bug-fixes:

You can try out the incremental by downloading it here.

Also, as noted on Twitter, we pushed some enhancements to the scanners and the local media agent for MP4 files, and I’d like to take a bit of time to explain them, because it’s a great example of the power of our new library and how quickly we can add major enhancements, and give them to you, without even needed to make a new release.

You might have a file sitting on your disk named “30 Rock/Sun Tea.mov” which an episode from the popular (although I don’t think much of it, to be honest) show. In order to scan into a TV library section, Plex needs to know the episode and season number, which it usually gleans from the filename (e.g. “S03E04”). Happily, we just pushed an enhancement to the scanner which allows it to parse MP4 files and determine this information through looking at the information in the file.

So now that it’s in the library, what about episode title, summary (or for a movie, plot, genres, actors, etc.)? This data is handled by metadata agents, and we have one specific one, the “Local Media Assets” agent. While most agents scurry all over the Internet looking for data, this one looks only on your hard drive, for things like poster files, fanart files, and now, in this latest push, metadata embedded in MP4 files.

The awesome thing is when you look at your metadata agent settings, and realize that you can *prefer* local metadata, but fall back to data from the Internet (seen in the screenshot below, where I’ve made Local Media Assets the most important agent).

This is really, really cool, and in my opinion, really brings your media to life and gives you the choice of deciding exactly how you want to imbue it with metadata. 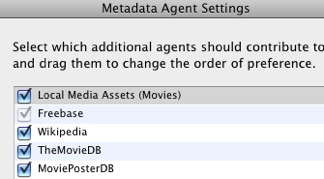 A new Plex incremental and some MP4 love is a premium feature and requires a Plex Pass subscription.